What a day! Stanimal dropped myself and three other hikers off at Rockfish Gap, literally exactly where I got off the trail the day before. Not that I’m a purist or anything. He took our photo and the three guys headed north and I, the lone SOBO, headed south. Because that’s what I do.

After five miles I came to the Paul Wolfe shelter and there were several NOBOs there, all guys, and we chatted for a bit. They were heading to Stanimal’s place for a nearo (nearly a zero, just a few miles hiked).

I got a liter of water from the creek and headed toward Humpback mountain.

And soon I realized that I did not take enough water. The sun came out and it got warm as I climbed up and soon, mostly after I ate my Subway sandwich for lunch, I knew I did not have enough water to be comfortable.

Some miles later when I got to the next water source I was so relieved. I drank a liter there and packed two out. I only had six more miles to the shelter but I knew I’d drink more than usual since I got myself all dehydrated.

Of course during those six miles there were about five more water sources, springs coming right out of gaps in the rock cliffs to my left. It was lovely.

It was a long 20.7 mile hike today but once I got here I felt better and relaxed. I realized that I was a bit grumpy during that last stretch and told myself yet again to not let that happen again with the water.

There’s a few Flip Floppers here and it’s nice to have company here. I have pitched my tent since the weather is lovely and I’m going to be asleep in about 30 minutes.

Another brutal and glorious day on the Appalachian Trail. 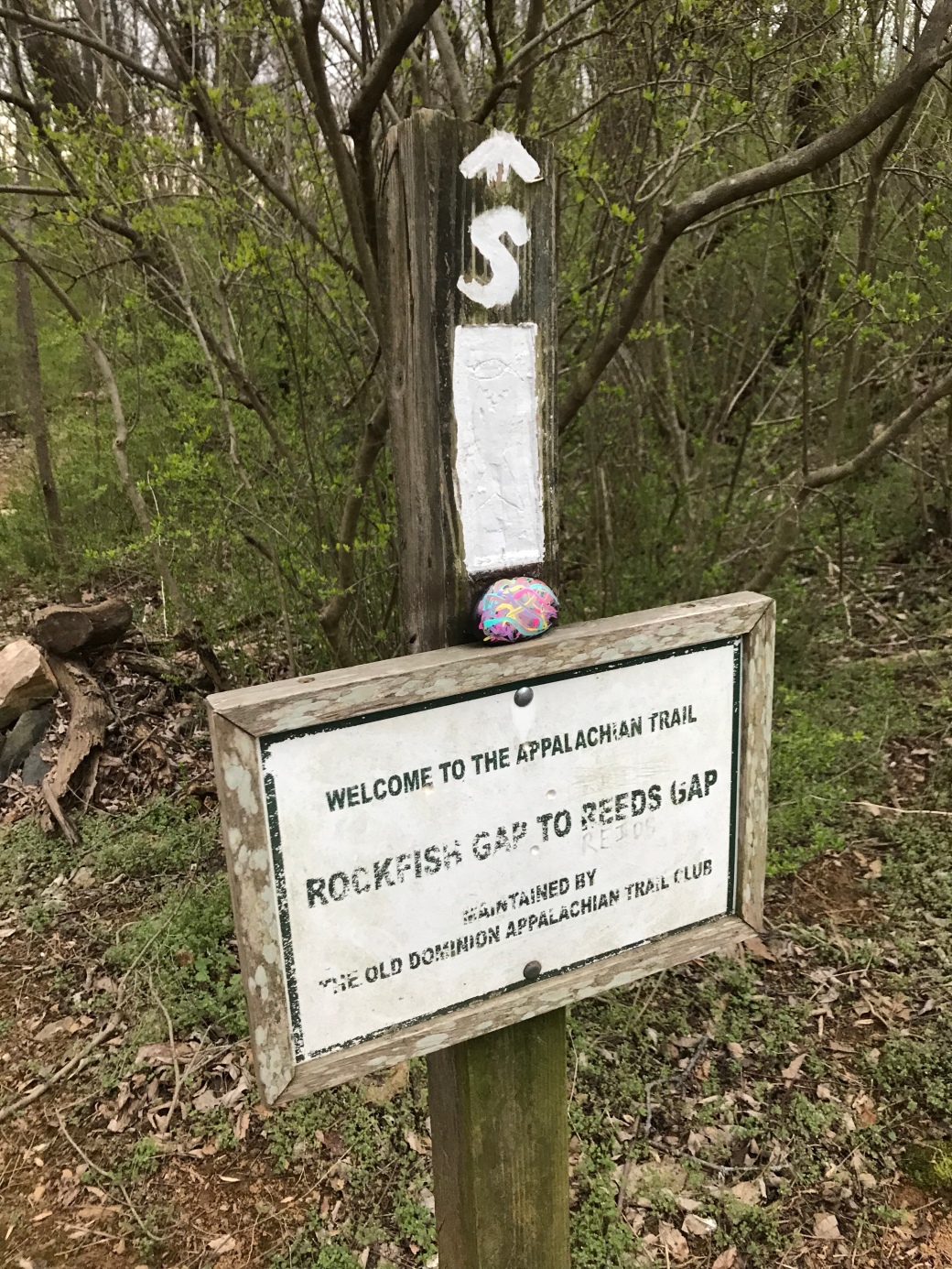 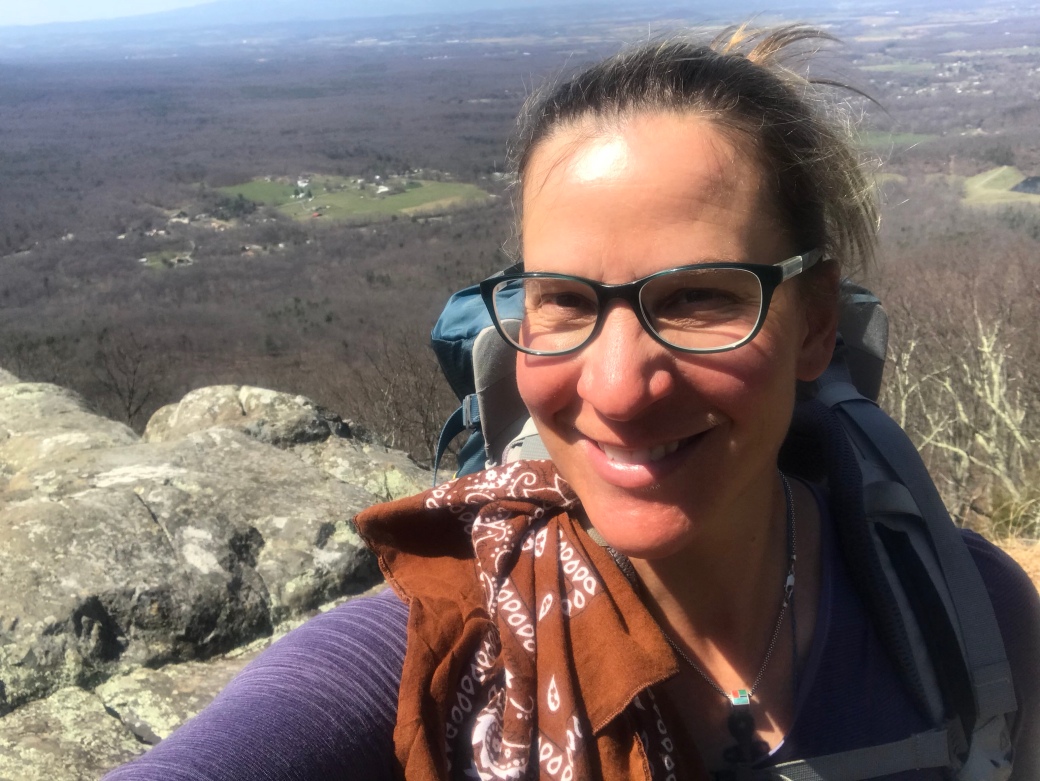 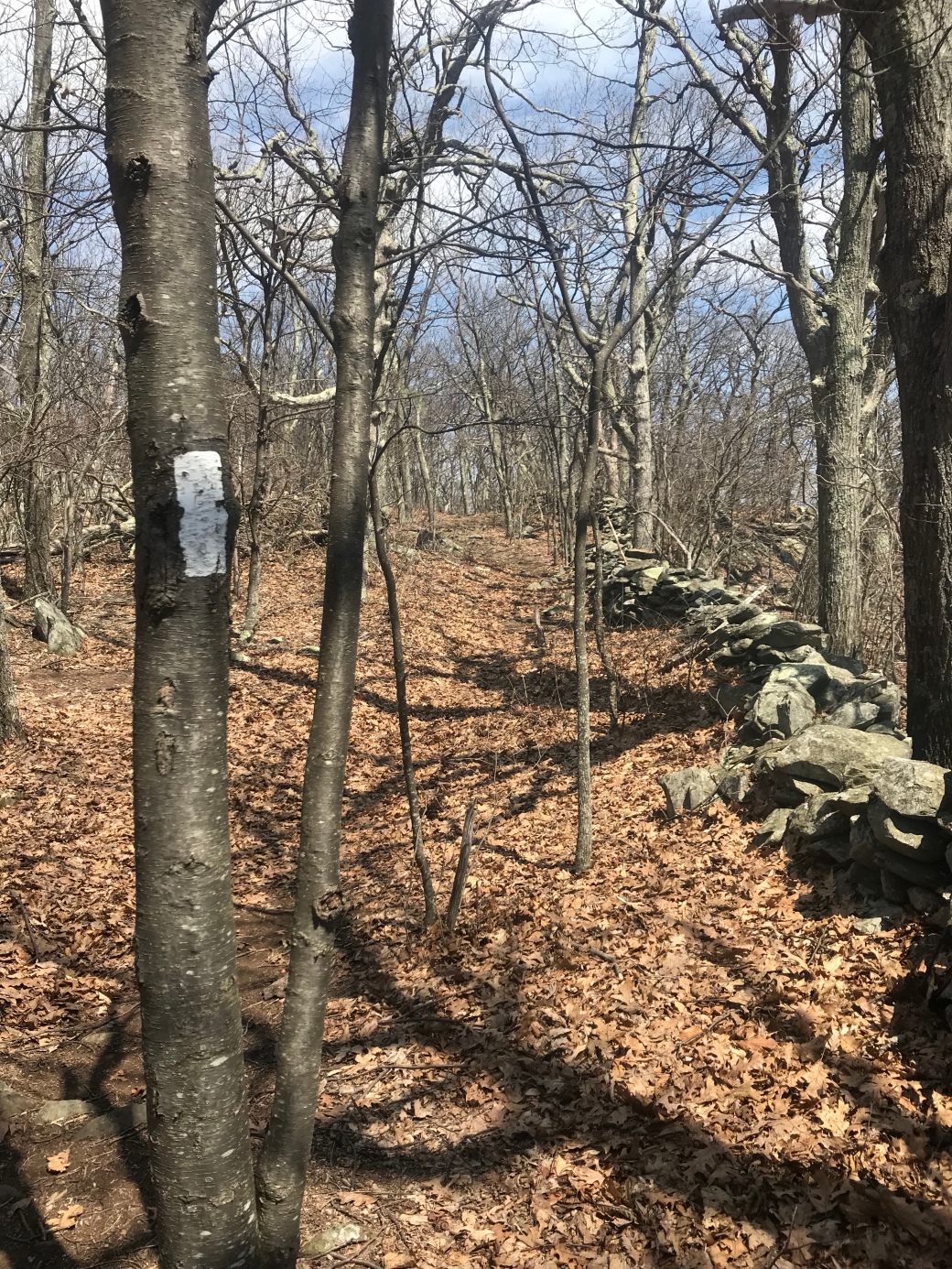 Another goal met today. I could have stayed down by the river and camped and been somewhat happy and hiked The Priest tomorrow morning but that’s not what I wanted. Granted, it was lovely to dunk my head in the ice cold river. I had hiked up Three Ridges mountain and then down, and it was hot. I filled my water bottles and began the four mile, 3,000 foot climb up. There was a small creek a third of the way up and so I stopped there and cameled up (drank as much water as I could) and packed out two liters for the rest of the climb. It was just enough.

I got to the shelter, which is just on the other side of the summit and was happy to see some women hikers. I usually only see men. I met Hoilday and her mom, Tagalong. Also, Powerhouse. All NOBOs, which means I won’t see them again. That’s ok, it was nice to talk with them and trade trail stories and share information. I like hiking by myself during the day, but it is really nice to share camp with people in the evening.

My Pocket Rocket stove is in its death throes; I’ve had it for several years now and the threads where it screws into fuel canisters are shot. I can coax it into working just barely. Keith has sent me his stove, and I should be able to pick it up Wednesday or Thursday in Daleville. I may take a zero day there too. I’ll be ready for one by then for sure.

So here I am in my tent, warm, fed, comfortable. My feet have that familiar hurt and I know they’ll be feeling good tomorrow morning. So now I think I’ll put in my earplugs and read until I doze off. 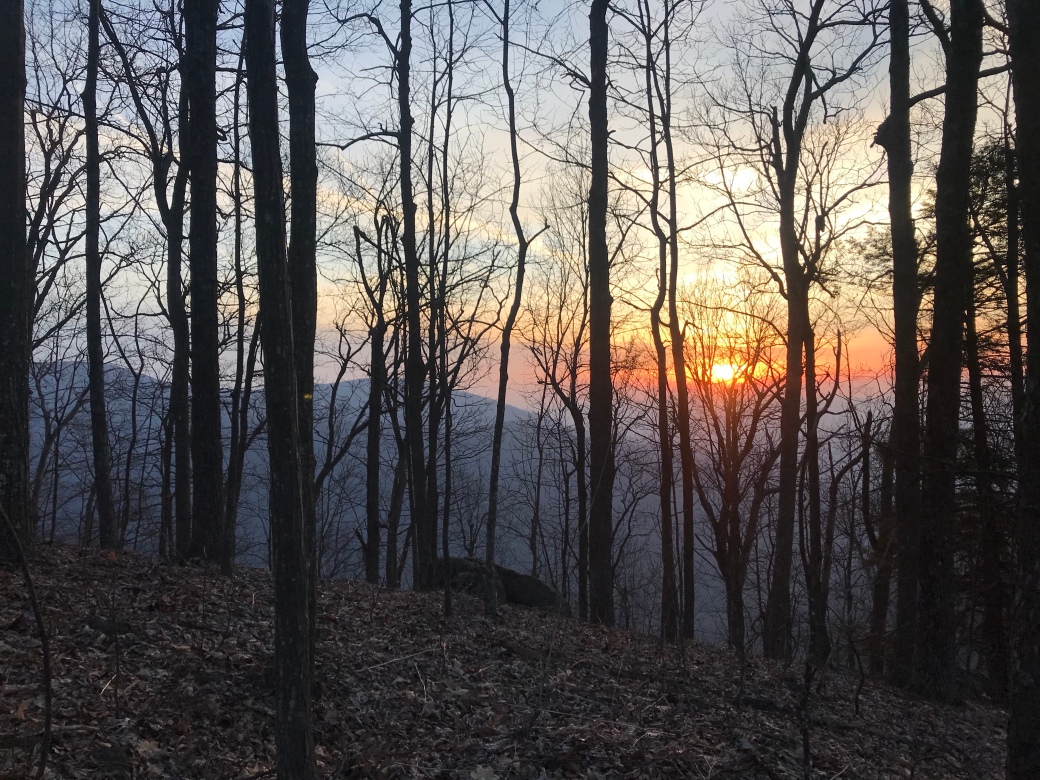 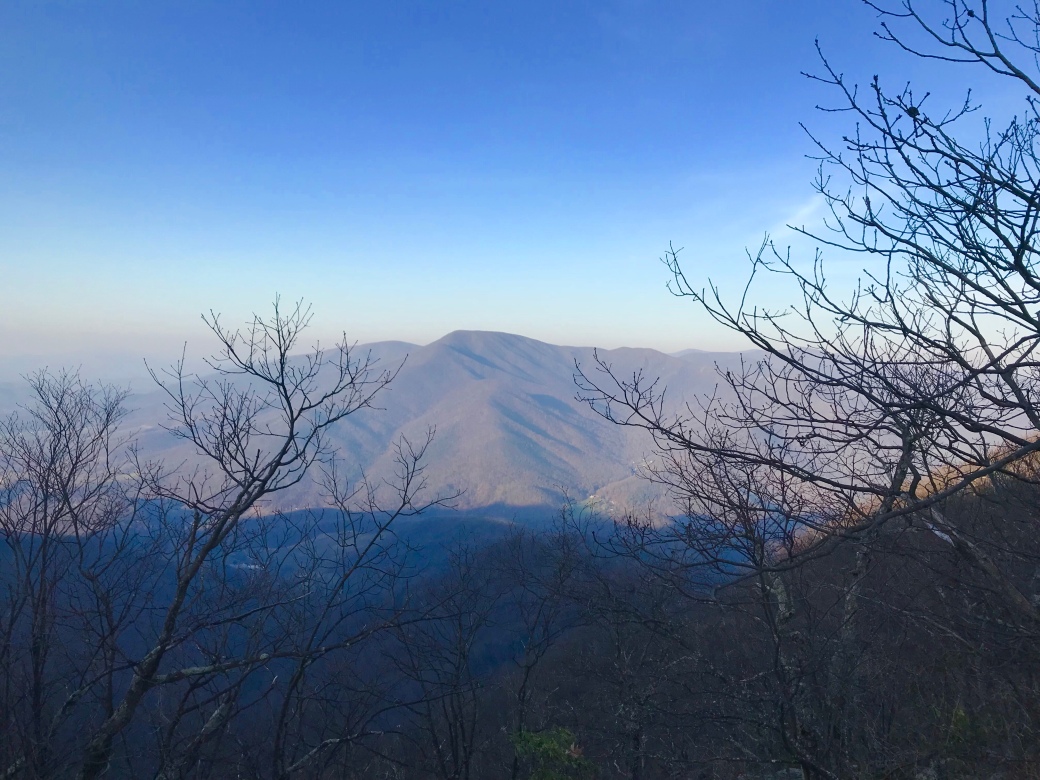 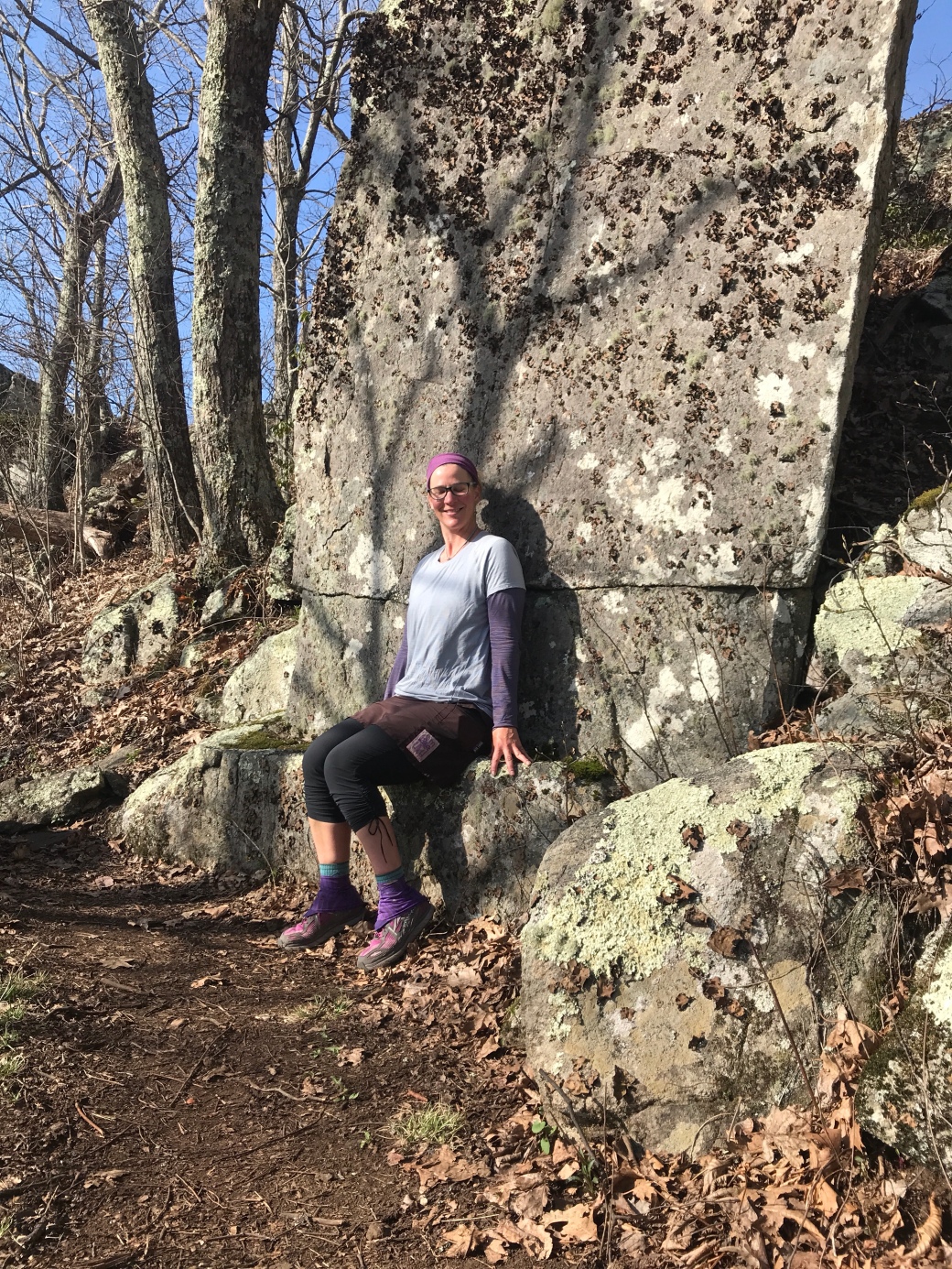 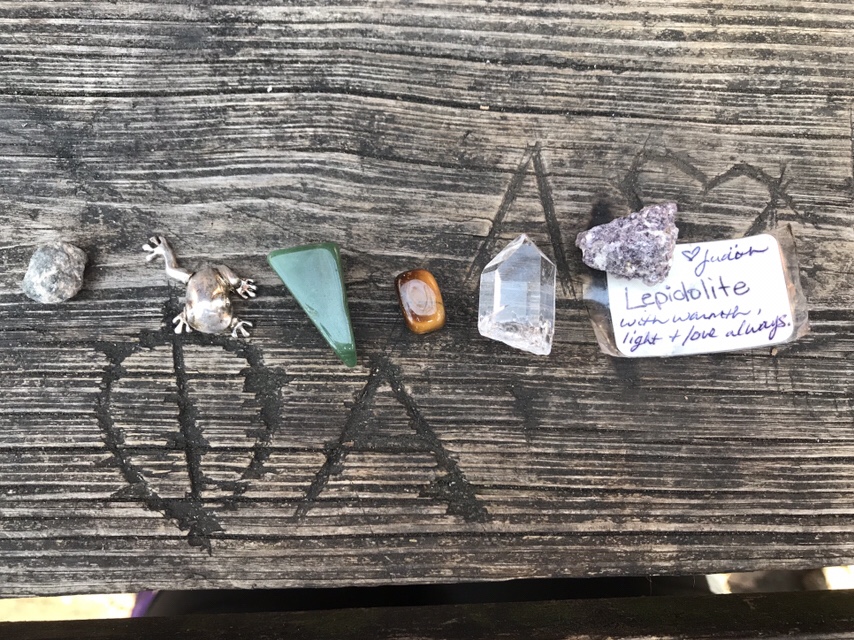 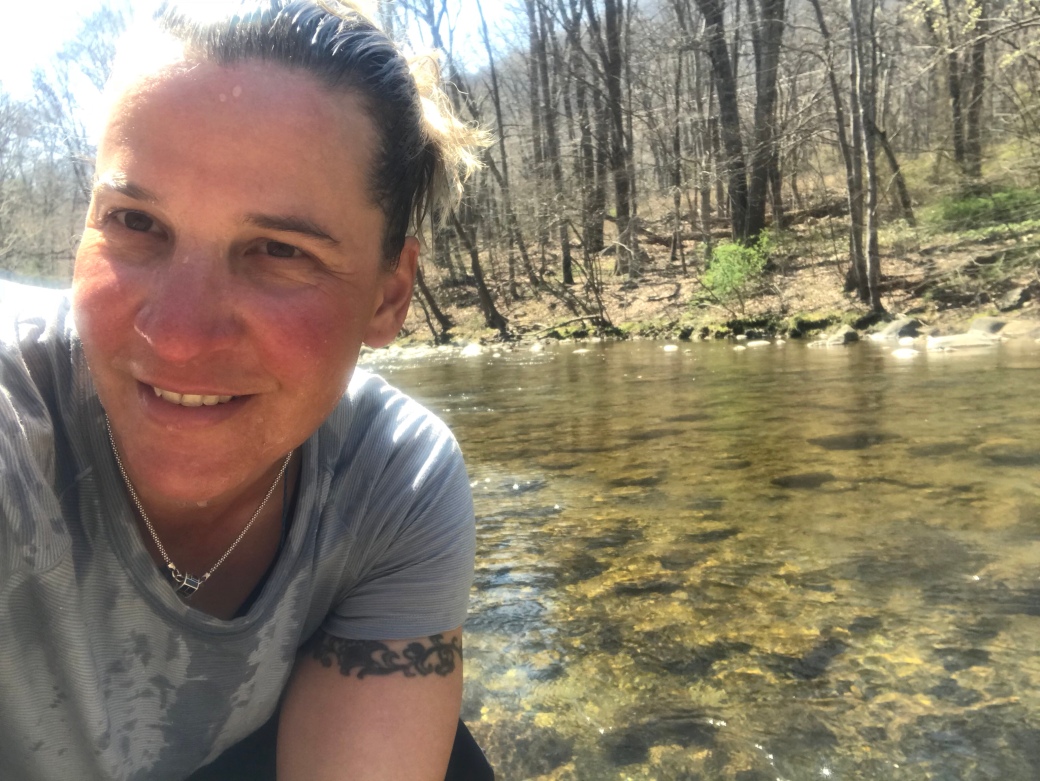 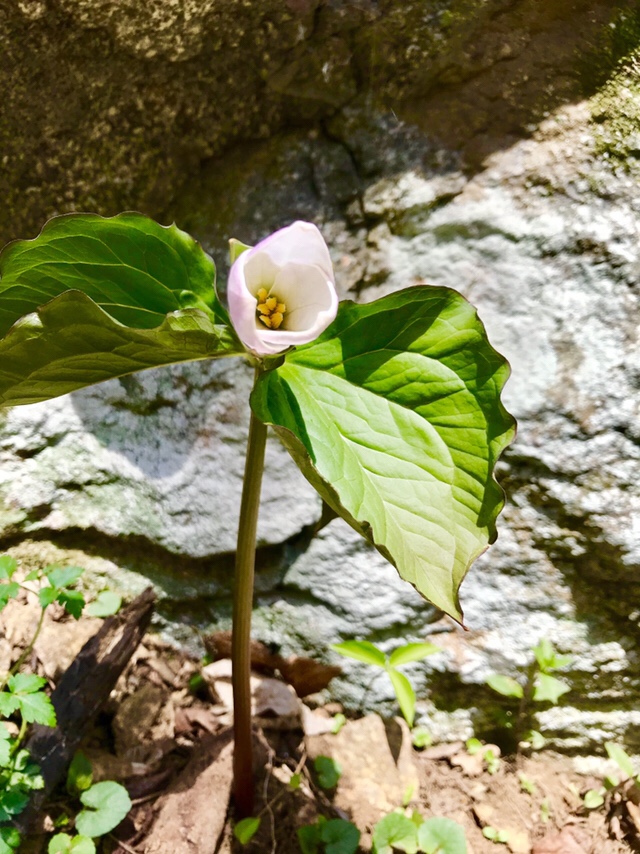 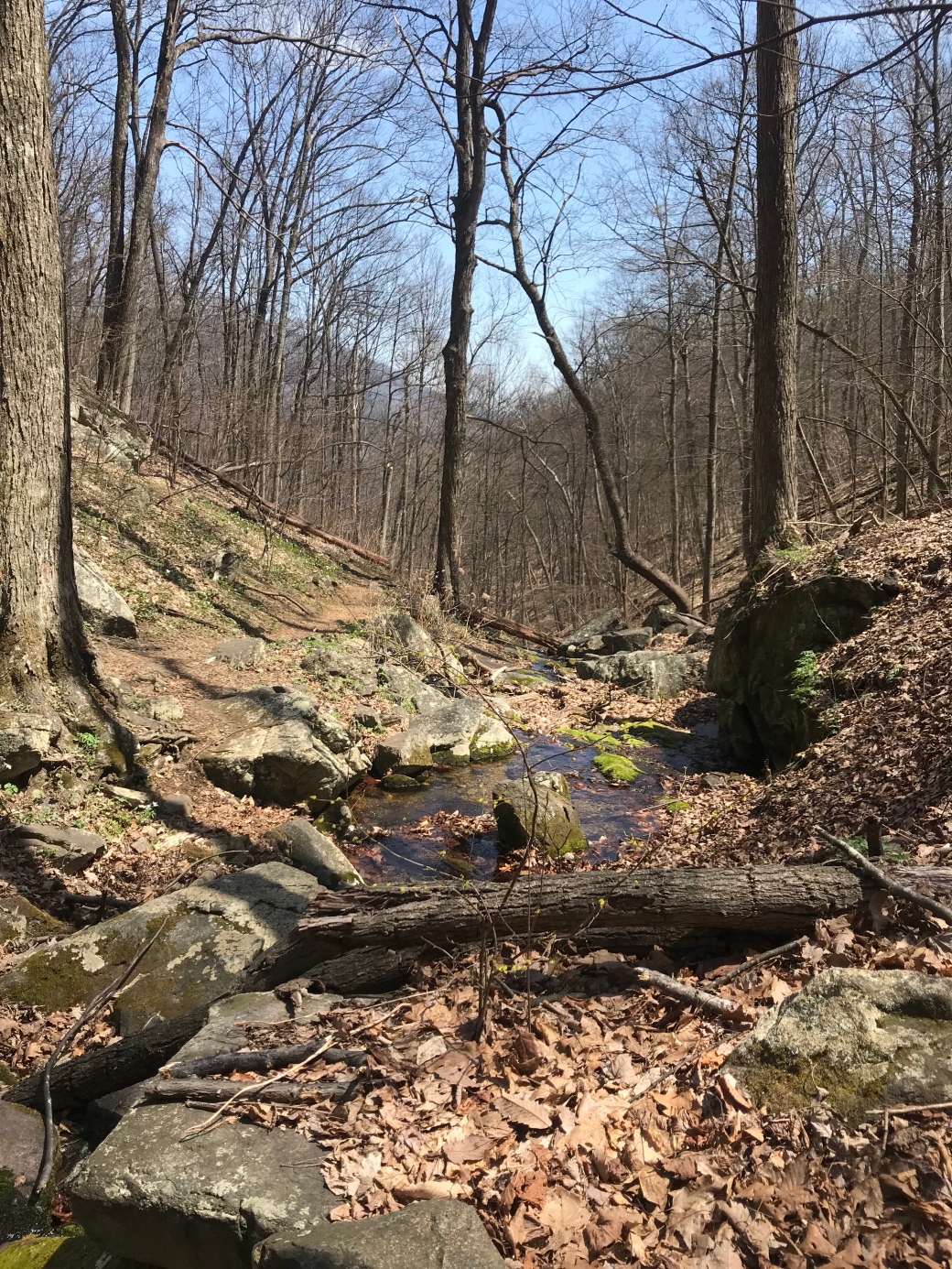 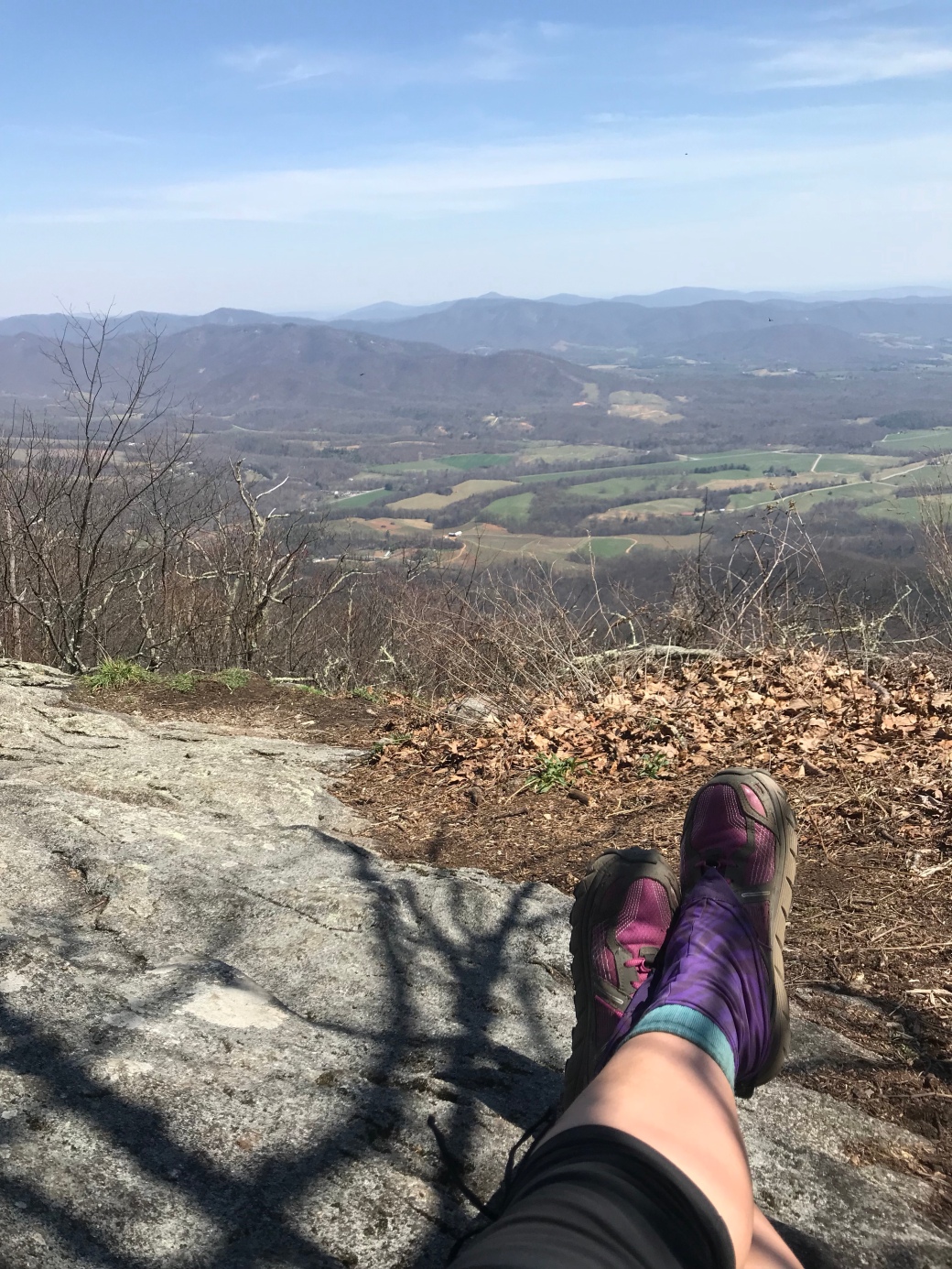 Today was incredible! Ok, so I say that about a lot of days in trail, but today was an exception.

The trail sent me many signs that I am on the right path with my immediate plans and it recognized my needs.

Or, in other words, my needs have been met by chance encounter and good timing.

As I left The Priest Shelter I had the good fortune to encounter several women with whom I had excellent conversations. The first, Fran and Katie, were at the next shelter where I stopped in for my second breakfast. Fran is 79 years old and Katie is probably a few years older than me. Both started talking non stop as soon as I showed up. They are obviously good friends who know each other’s quirks well and it was fun to listen to them.

Fran gave me a Harper’s Ferry quarter for good luck and I stashed it in with my other good luck charms. I wished them happy hiking after a bit and I hope to see them today here at Cow Camp Shelter, since I am taking the day off (zero day) tomorrow.

After a few miles I ran into NOBOs No Shoes and Research. These women told me about Fresh Grounds, and said that he’d for sure be at Hog Camp Gap, 6 miles down the trail. We talked mice, shelters, men and hostels for a good 20 minutes before going on our respective ways. My spirits were lifted with good, strong positive female energy and I crushed the 6 miles to see Fresh Grounds.

He has a few tarps set up next to the trail by the trailhead parking lot and he said, “Welcome to the Leap Frog Cafe, have a seat, grab some Kool Aide and I’ll make you a salad. Then some chicken tenders and how about grilled cheese? Have a seat!” I grabbed a drink and sat down. Fresh Grounds is an AT hiker who also does trail magic like this when he’s not hiking. He drives to different spots up the trail to feed hikers for free.

I sat and ate salad, green beans, chicken tenders, French fries and grilled cheese until I could eat no more. Then some AT alumni from last year showed up with ice cream because they read on Facebook that Fresh Grounds was at this location and they happened to be nearby.

The trail community is pretty awesome.

We all sat and chatted when some weekenders hiked by and Fresh Grounds hailed them and told them to pull up a seat. He fed them too.

After I had somewhat digested the feast I had just inhaled I prepared to hike the last couple of miles to the shelter. Since Fresh Grounds packed me out with tons of food, fruit and sweets I realized I now had the chance to take the rare on trail zero day. Usually zero days are in town, and I don’t take trail zeros usually because I don’t have the food to do so. Now I did!

Once I got to the shelter the weekenders arrived just after me and pitched their tents. I decided to sleep in the shelter, but ended up pitching my tent in the middle of the night to escape the mice that kept crawling into my hair.

Yep. Crawling into my hair.

Anyway, we got more food from some groups that were camped over in the group tenting area, and even fortune cookies! I had more great conversations with some of the women in these hiking groups and some kids as well. I spent some time telling several kids about LNT (leave no trace) after I caught them trying to carve their names into the shelter. Then I told them how I always pick up trash I find and how it makes the wilderness nice for the next folks who come along. Then later in the evening I saw them walking around looking for trash. 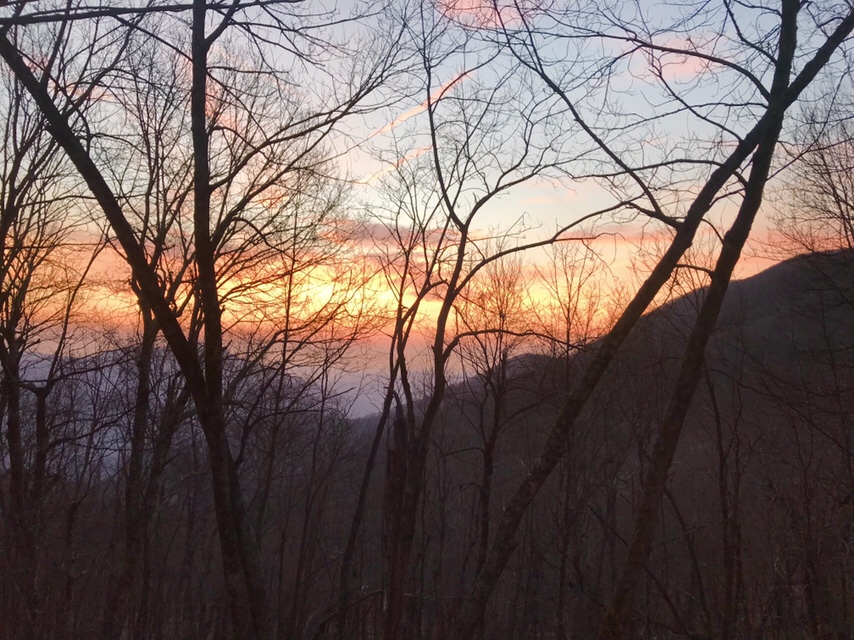 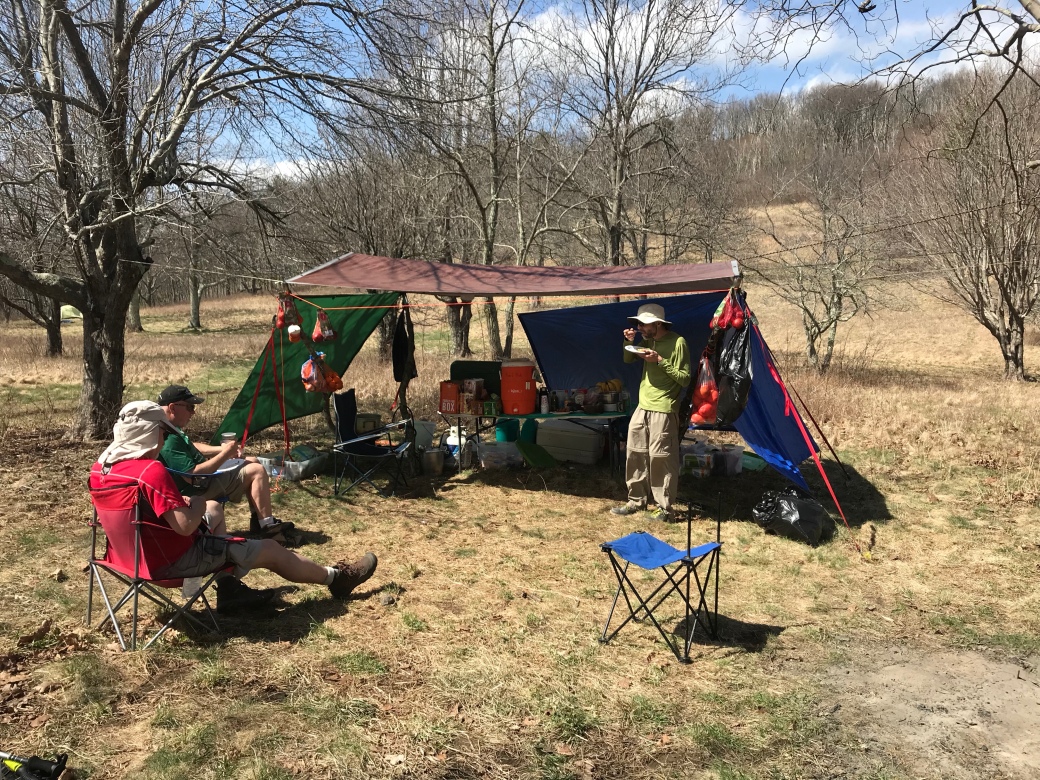 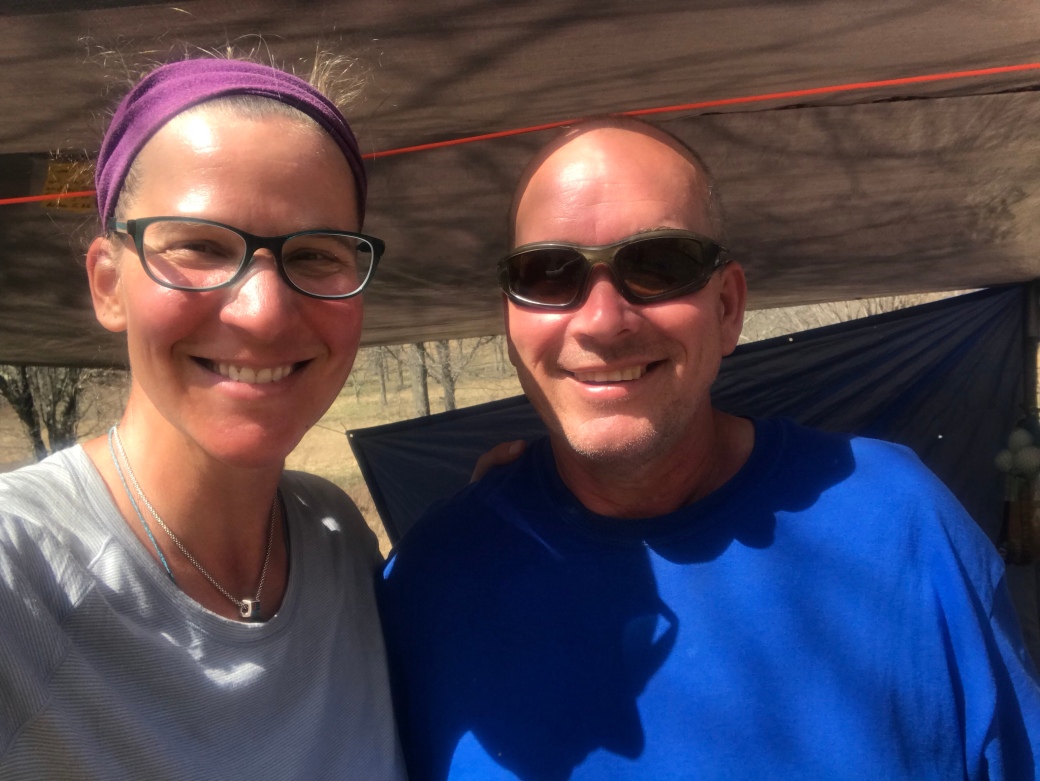 Today is my first zero day, zero miles hiked. It’s cloudy, and not was supposed to have rained by not but it has not. Tonight big thunder storms are expected. A good, uneventful day of napping, reading and eating. And hydrating.

I ended up pitching my tent around midnight last night because mice were getting into my hair. Ugh. No more shelters for me.

I was up at 5:30 and it was still raining. I moved my stuff over to the shelter so I wouldn’t have to pack up in the rain. Rollercoaster, a section hiker, was snoring away. I shined my red light headlamp up and saw two huge mice up in the rafters staring down at me. Like something out of a Hitchcock movie. So creepy!

I was outta there and happy to be hiking. The rain stopped and it was blustery most of the morning. I hiked up and over a ridge and followed several overflowing creeks for about 8 miles. I had to get my shoes wet a few times but that’s ok. They are almost dry now.

I wanted to push a few miles past the shelter but a ranger I ran into crossing a road said that high winds are expected up on the ridge line and it is supposed to drop to about 30 tonight. And there’s no water up there. So here I am.

I’ll be up early hiking 10 miles to Glasgow for resupply, laundry and battery charging. Then I’ll hike two miles to the next shelter. A good day today. Tired and happy. 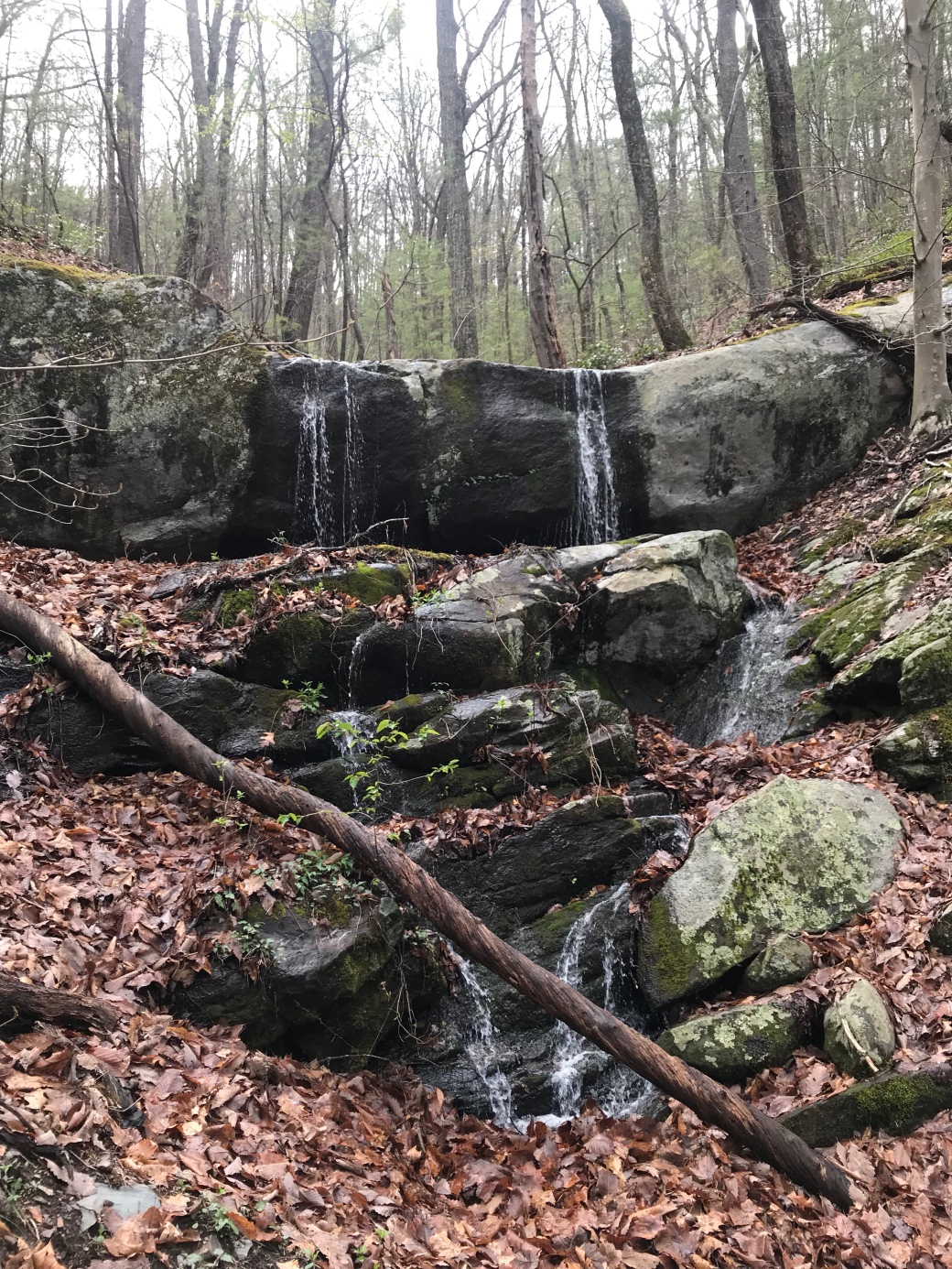 This morning was cold, but not so bad. Until I climbed up the ridge. High winds, snow flurries and cold stayed with me for 9 miles until I got close to highway 501. The sun came out abt the walk next to the creek was lovely. I got lucky and caught a ride into town with the shuttle driver from Stanimal’s hostel. He has one down here too. So I came to the hostel and for a small fee I get a shower, laundry and a ride back to the trail later this afternoon. I did a hasty resupply at Dollar General and finally got my burger at Scottos.

So now I have some time to relax, shower and warm up. It’s a short 2 mile hike south to the next shelter, but I’m sure I’ll be tenting after the mouse fiasco at Cow Camp.

So I’m watching Sharknado 5 with some NOBOs, and making the most of this time indoors.

Another beautiful day on the Appalachian Trail. 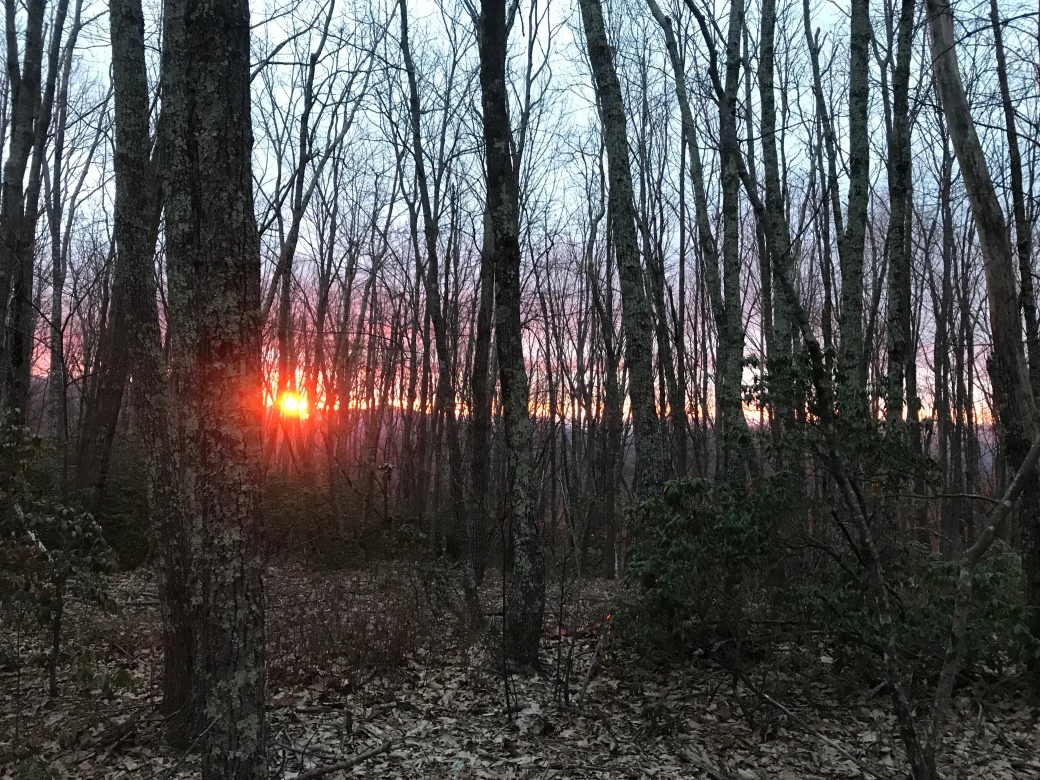 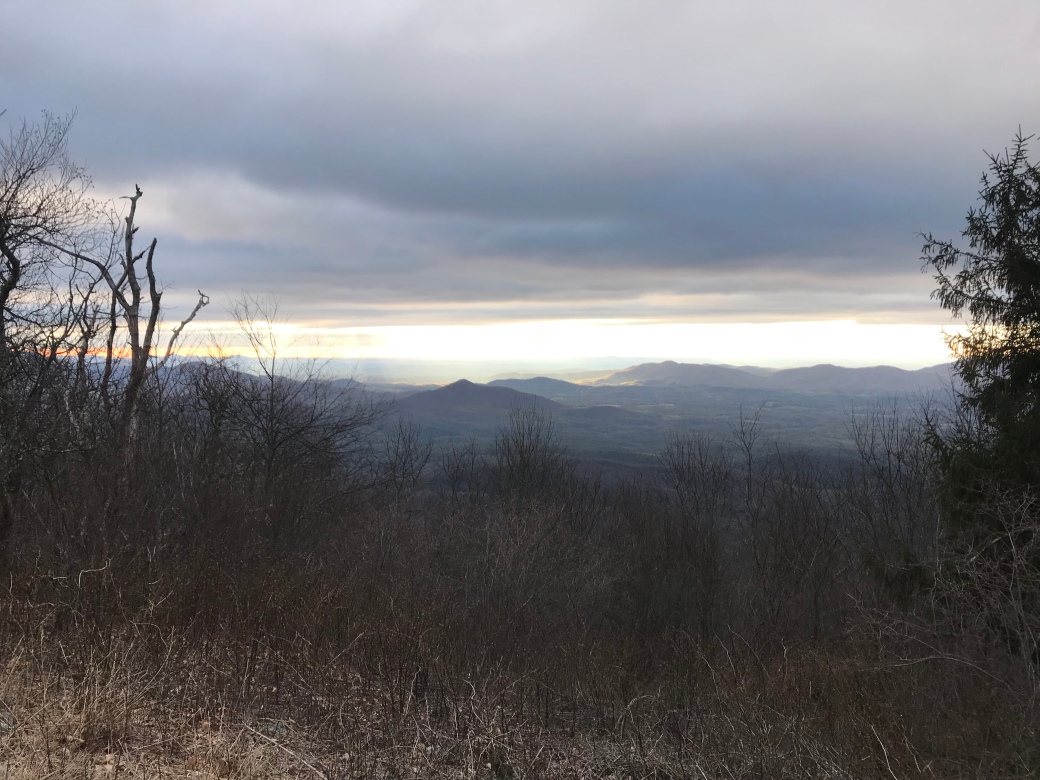 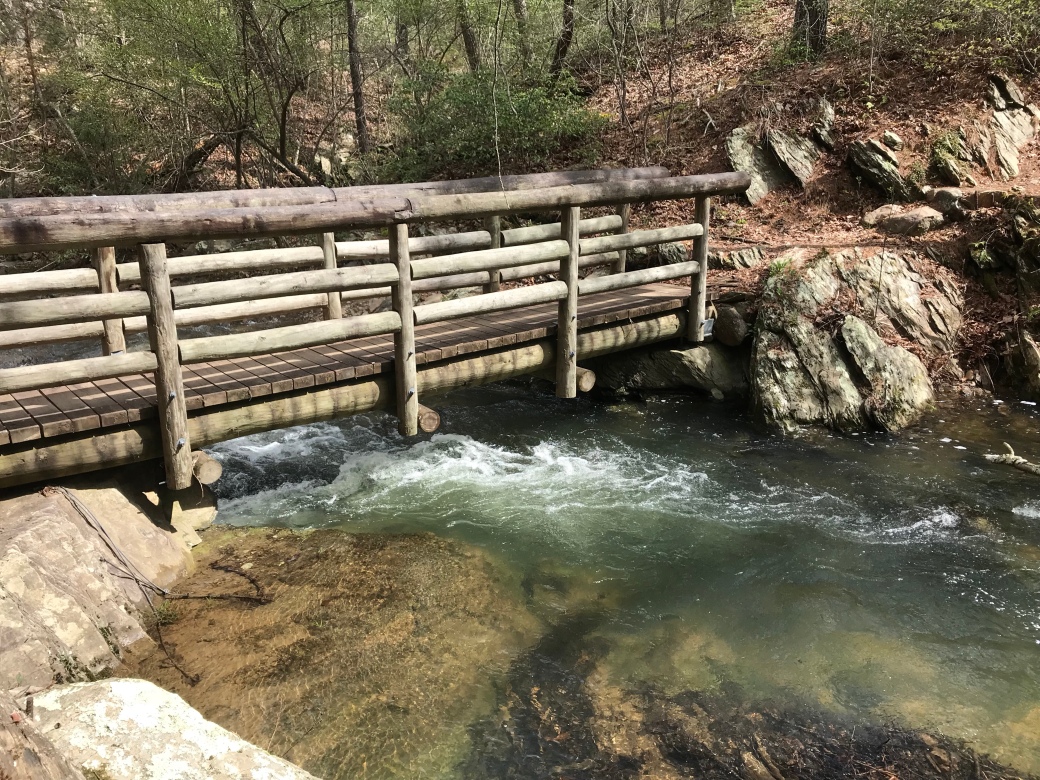 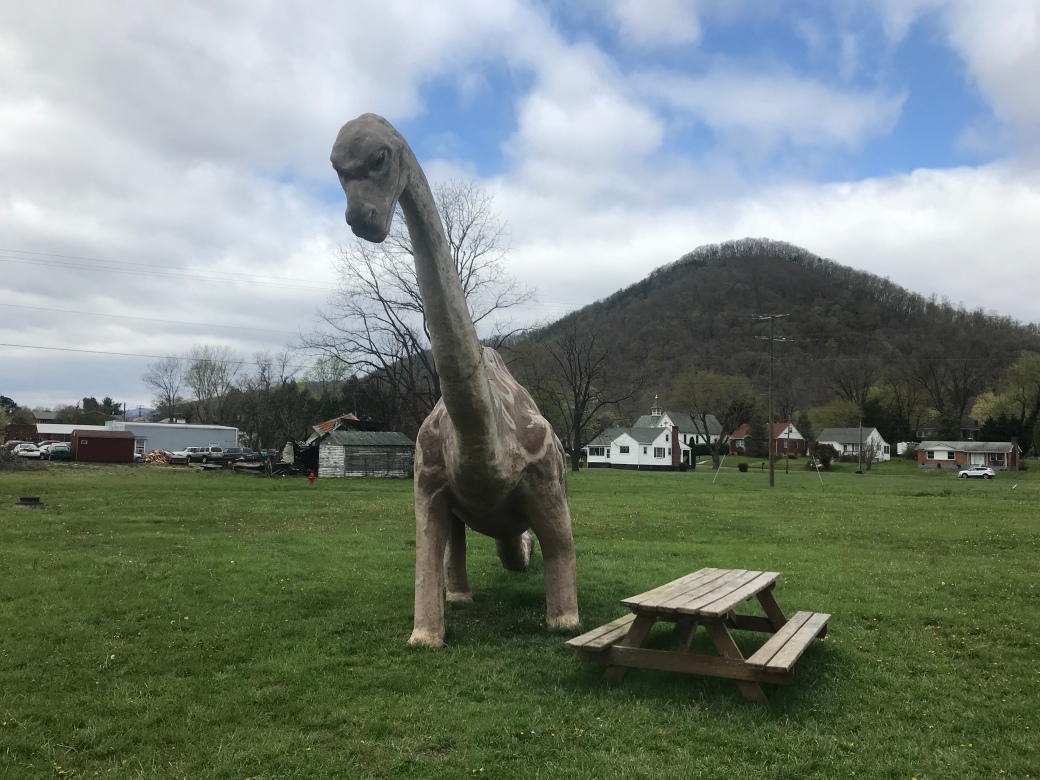