I walked about 6 miles in a couple of hours on the same dirt road we hiked yesterday to arrive at the Toaster House around 8:30am. Perfect. After some photos in front of this iconic stop on the trail I walked inside to see my package waiting for me among others for future hiker guests. I saw Matt, who in my mind is Bear Rider (due his LEGO bear and hiker) and I chatted with him before heading upstairs to claim a bed and drop my pack. As I walked down to the highway I saw a cat near the RV park. Of course I called her over and we talked for a bit as she followed me over to the post office. Kitty love is the best. As I got on the highway kitty ran back to the RV park. Smart kitty.

At the Gatherin Place OB and I ordered breakfast burritos as Max got pancakes and eggs with bacon and hash browns.

Overall, it was a day spent lounging around and eating, which was my intent. I know I am ready for a zero day, but that can wait a few more days. It’ll make it all the more zeroliscious.

Larry and Charity own the TLC Ranch about 16 miles north of Pie Town. OB had contacted Charity asking about a water source and the next thing we know we are invited to dinner and to camp. Of course! Mike, a hiker we met at Doc’s who is kind of hitchhiking up the trail, hiked out of Pie Town with us and to the TLC Ranch. The four of us were made very welcome and Gracie, Larry’s granddaughter who is three, took me under her wing and showed me around the ranch. A very gregarious young girl and very keen on Brandon! I thought for a moment I might lose him to her but our connection is a strong one and he decided to stay with me.

At dinner, which was slow cooked pork loin and veggies with potatoes and jalapeños, we all sat together: four hikers, Ester, Charity’s mother, Tim and Yvonne, Gracie’s parents, and Lynette, Larry’s daughter. And Gracie of course.

After dinner Larry and Charity took us out to see the horses and we talked about their plans for the future of the ranch. These folks struck me as the kind of people who follow through with their intentions, and so I would not be surprised to hear that in a few years this ranch will be totally different. I love meeting genuine people who have dreams which they fully intend to live. Larry and Charity are such folks.

I drifted off into a deep and solid sleep in one of their RVs and woke to . . . 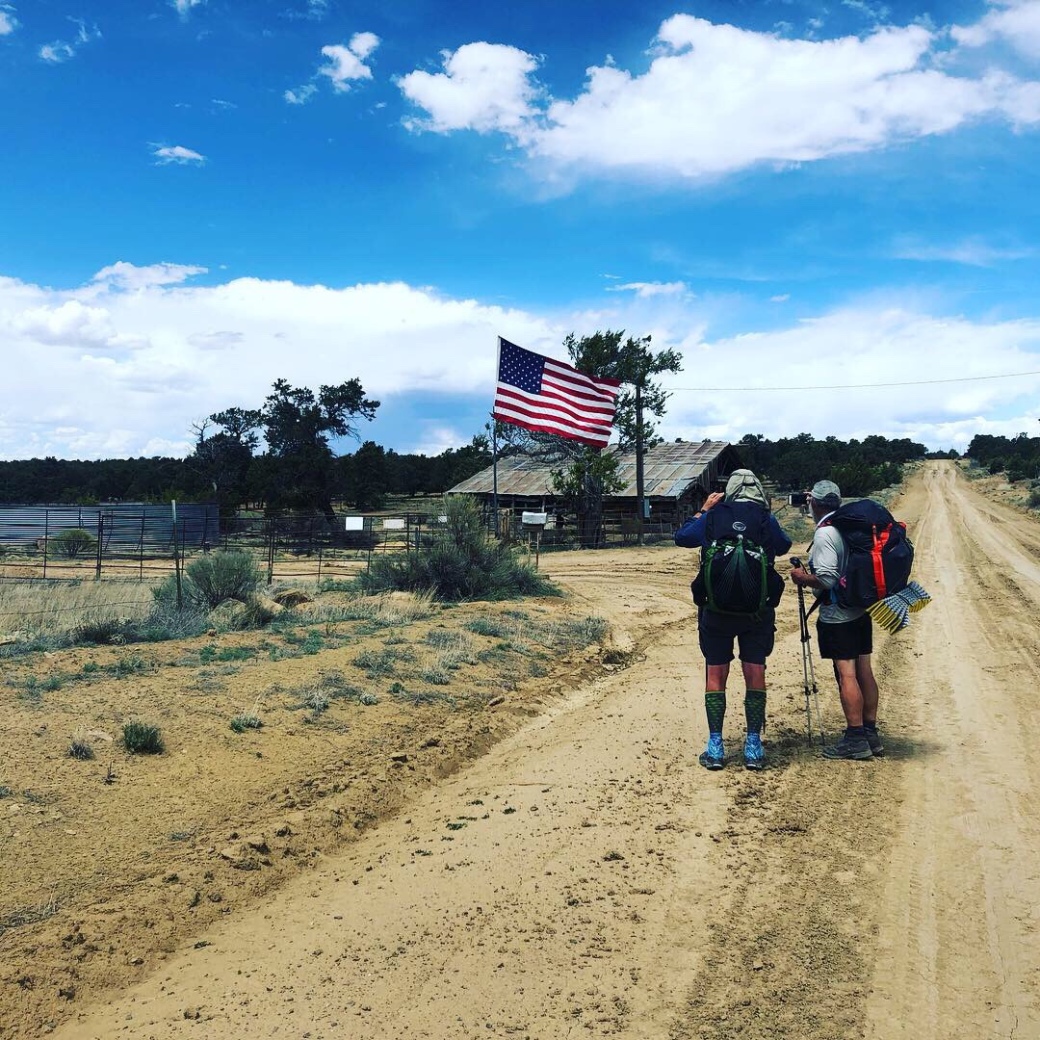 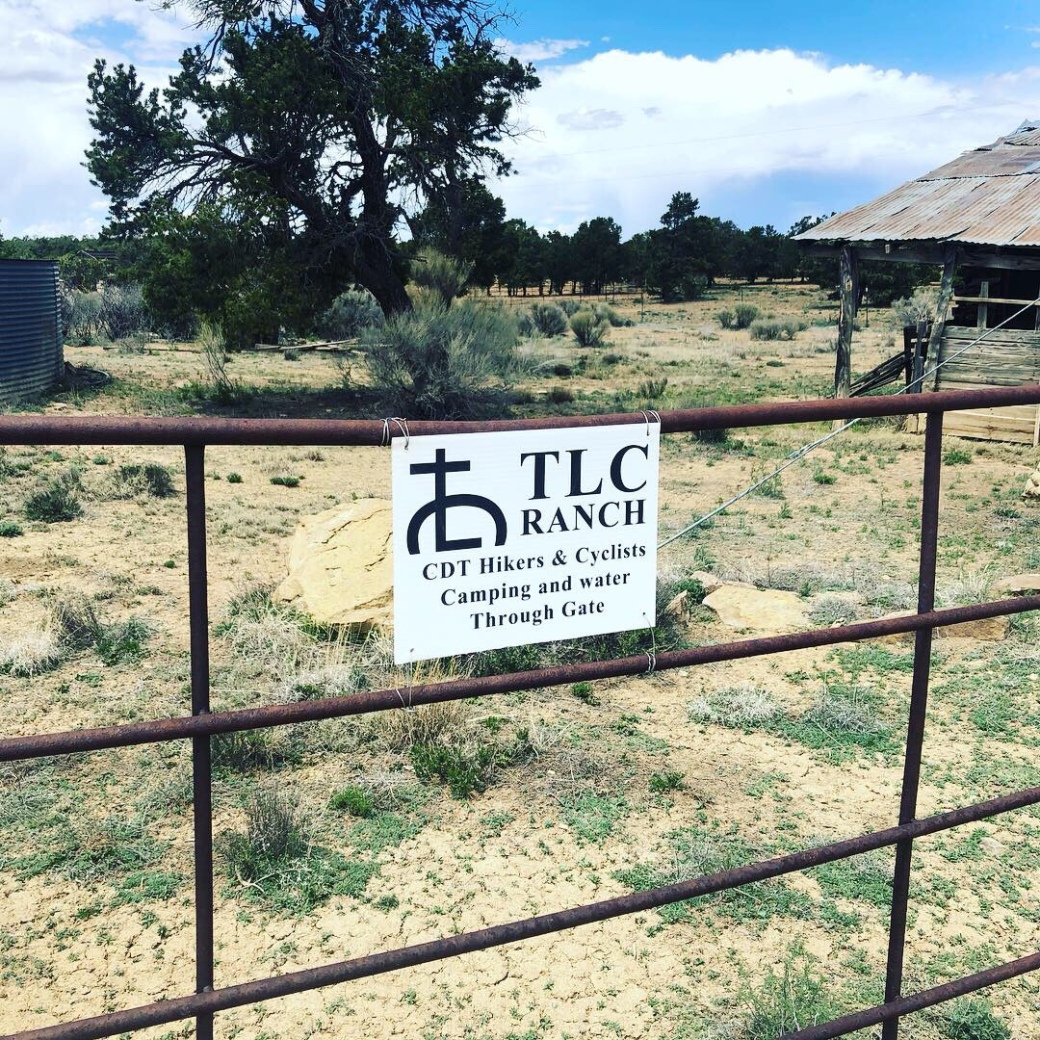 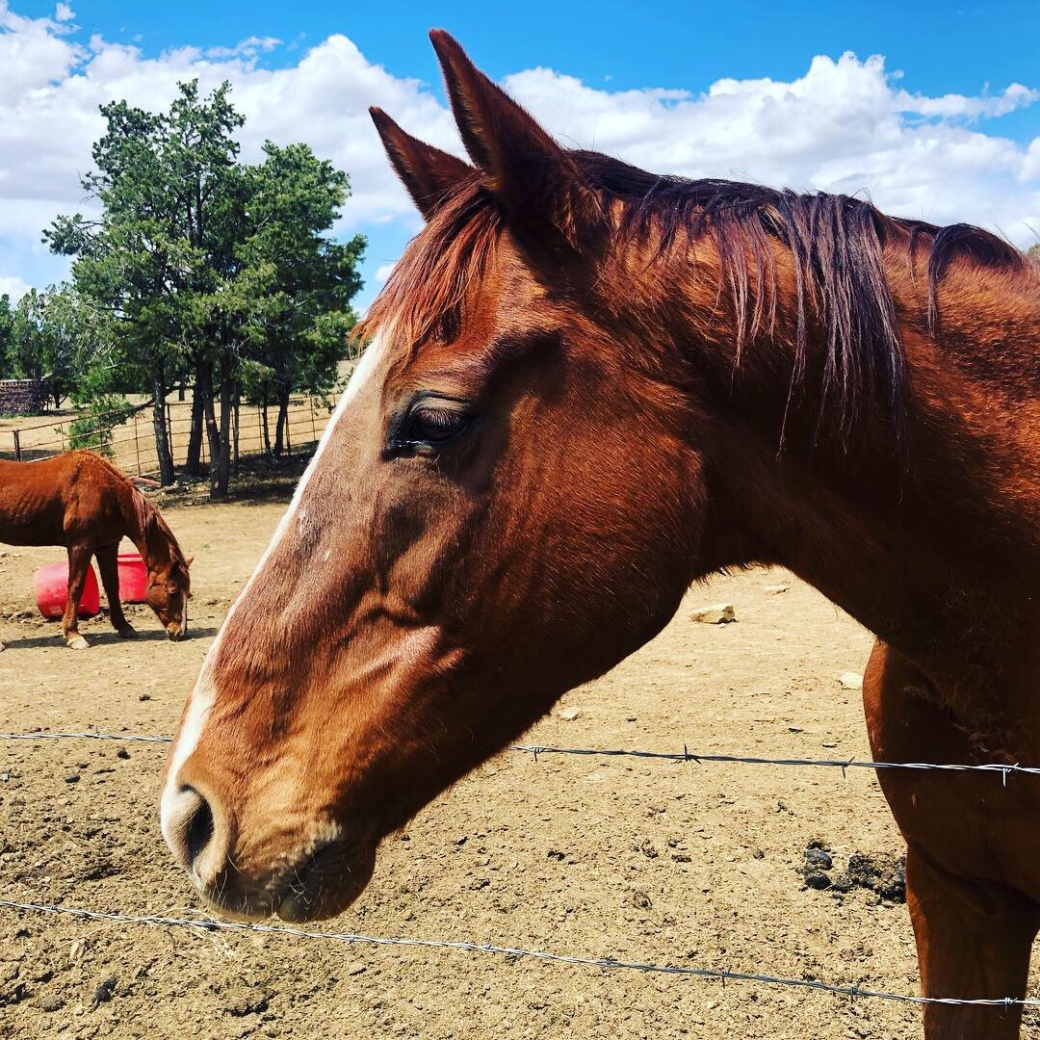 . . . Larry in the house making biscuits and gravy for breakfast. After I packed my stuff up I headed over to the house for breakfast. We chatted about life in New Mexico and ranching. This is probably a good time to say that Larry is a real deal cowboy. Through and through. And Charity is a no bs, tough as nails, sweet as can be cowgirl. I admire them so much and wish them the best in their endeavors.

Mike got a ride up to Grants with Larry and I hit the trail with the guys. Time and miles passed quickly as the road was mellow and I covered ground efficiently.

By the time 2pm rolled around I had hiked 15 miles with 5 or so to go. Instead of hiking two miles out of the way for water we found a decent source right off the road. Not the best option but certainly the only one as road walking has made my feet more tired than usual. Also, I really need new shoes so that makes my feet hurt too. Anyway, I’ll get new shoes in Grants in two days so that’s alright.

It looks as if it may be warm enough to camp with the rain fly off my tent. I’m going to give it a go!

I awoke to the sound of a coyote quite near, and after that I couldn’t really get back to sleep. I had not slept well and once I got going I felt so tired. I hiked 4 miles to the South Narrows trailhead and from there I went up on the mesa. Stunning. My feet were hurting way more than usual and while I was stumbling along the rocky trail OB said to me, “Look, you know you’re a badass. Ok? You know what you need to do.” I said I felt like a failure and he said something like, no way, you just need to take care of yourself. So I turned around and began to hike back to the parking lot where I was sure to get a ride into Grants from some day hikers or something. I ran into Max and he told me to do whatever I needed to do to “preserve the future of my hike.”

So while I was hanging out in the parking lot all the sudden I started to feel nauseous. I thought it was from lack of water or bad water or something. Chewed up a Rolaids. Then a CDT hiker from 2015, Race, pulled over and offered me a ride. Oh heck yes! It was nice to pick his brain a bit about trail info, especially the trail north of the Ghost Ranch.

Race dropped me at the Southwest Motel here in town on Route 66. Get your kicks! Heh.

So I got an inexpensive, clean room with a hot shower and cable. And WiFi. Matt from Denver is here too and OB and Max will arrive in a few hours.

So I’ve been vomiting all afternoon and I’m certain I have a fever since I’m warm one moment and freezing the next. Joy. I’ll be here recovering for at least two days and hopefully I’ll be 100 percent on Wednesday. If not I’ll stay longer.

Feet still hurt. New shoes tomorrow from the PO. Because my sweetie is the BEST!

Another stellar day on the CDT!

“Nothing is heavier than a bad attitude.”

3 thoughts on “Pie Town to Grants”